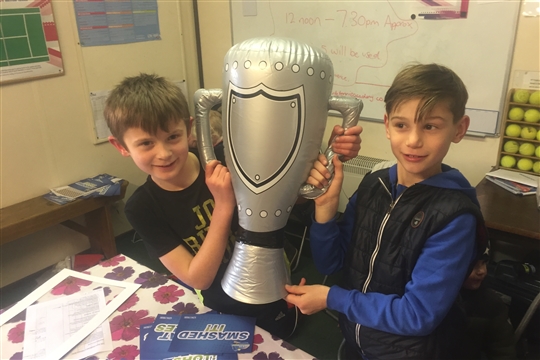 A cold, bright Sunday in early February saw the LTA’s Team Challenge Event make its debut at York Tennis Club, with 52 children taking part across 5 events. All matches throughout the competition were tie breaks to 7, with a deciding point should the score reach 6-6.

Group 1, ( the ‘Kyle Edmund Group’), saw Harry Vamplew and Zachery Tighe make impressive tournament debuts both in singles and doubles and record some notable victories, narrowly missing out on a place in the semi finals. Harry Skidmore (also making his tournament debut) and Ignacio Lloyd-Moliner ultimately progressed to the semi final as group runners up only beaten in the group standings by the flamboyant topspin and serving power of Stefan Martin and talented young partner Thomas Titchener.

Group 2, (the ‘Roger Federer Group) , saw fantastic performances from emphusiastic young guns Joseph Greaney and Will Parry who narrowly missed out on the semi finals. Debutants Thomas Binks and Theo Battersby played with smiles on their faces and gave the crowds plenty to cheer about finishing the group as runners up to dominant group winners Nathan Falgate and Jake Jennison.

The semi finals saw the 2 group winners progress to the final and utimately Nathan and Jake were too consistent and strong in the final taking the title, the inflatable trophy (like Wimbledon on temporary loan) along with the medals.

The mini tennis orange event saw a strong field of 8 competitors, 4 teams fight it out for glory. Amelia Beranski was flying the flag for the girls and spartnered the ever exciteable Samuel Kanakaraj with impressive results. Jake Jennison performed very well under pressure and showed good focus and tenancity in making the step up from red to orange ball, partnering young Charlie Dutton who stepped in at the last minute to help and showed a good array of shots. Jack Hamilton and Oliver Dutton, the pride of Appleton Roebuck, fought tenanciously to finish a very creditable second.

Stefan Martin and Daniel Cranidge were ultimately too strong for the rest of the field proudly lifting the inflatable trophy (pictured) and securing their first Team Challenge gold medals.

The mini tennis green event saw an equal split of boys and girls compete in a 4 team (8 player) shootout. Clara Stanyon-Carr and Sophie Johnson fought valiantly against the boys. The spirited pairing of Tilly Glover and Lucy Titchener also competed well against the rest of the field, losing 1 or 2 key points at crucial times but showing great potential for the future.

Needle matches were to follow between the team of Daniel Cranidge and Sam Dewhirst and the team of Tristan Pemberton and Anton Nazarov, who could be rivals for years to come. The matches could have gone either way and after some epic contests in both singles and doubles the Daniel / Sam combination were ultimately vanquished leaving Tristan and Anton to lift the inflatable trophy and claim their gold medals.

The U12 event saw a strong field of 8 players (4 teams), including full compliments of 4 of York Tennis Club’s 6 U12 LTA Team Tennis Teams and the all girl team of Freya and Eva from Starbeck.

Eva and Freya competed well in both singles and doubles and grew in confidence as the tournament progressed and in the final rounds beat the ultimate tournament winners in a closely fought tie break. Dougie Brewer and Oliver Callaghan showed great promise for the season ahead with some tenacious performances against some more experienced tournament players. Dark horses for the event Benedict Nightingale and David Lloyd Moliner had a string of impressive results but ultimately came up just short of victory finishing in 3rd.  Roman Zauner came out of tennising hibernation to partner the smartly dressed Ben McWalter, they produced some wonderful doubles performances but some inconsistent singles results ultimately cost them victory.

Tristan Pemberton again proved a thorn in his opponents sides, showing equally honed skills in both singles and double clinching his second title of the afternoon this time partnering the powerful yet precise Alex Nyeugen to proudly hold aloft the inflatable trophy and add further gold medals to their impressive collections. Trist

The U16 event, featured 8 competing teams (16 players) in 2 groups of singles and doubles play. It was great to see Ben White and James Brown, playing well, feeling good and back in competitive action. Oisin Papadopolous and Benji Alwiss showed flashes of brilliance and power and got some more valuable tournament experience.

Young Erik Gagula proved he will be a force to reckon with this year in U12 competitions and made the step up to U16 in impressive fashion partnering live wire Mitchell Guppy to some good results. Twin brothers George and Teddy Hunt showed they were still closely connected top scoring in the doubles event, claiming gold medals.

In 4th position were the Bootham pairing of studious Pete Woodmansy and all action Finley Richardson. Finley was on for a clean sweep in his singles group before being pipped and losing bragging rights to fellow schoolmate Euan Brooke.

In 3rd position under the watchful eye of coach Ryan Carrick and showing great all court skills and powerful groundstrokes were the Starbeck pairing of Ben and Lewis. It was a long day for the boys having supported the Starbeck girls in the earlier U12 event. A thank you to Andrew and Ryan Carrick for organising Starbeck teams to compete in the event and I’m sure further matches can be arranged between the players that I’m sure will be mutually beneficial.

In 2nd position were tenancious Euan Brooke and the backhand dynamo Archie Glover, who performed consistently well in both singles and doubles.

Ultimately victory was claimed by the 2017 Aegon Team Champions Thomas Johnson and Harry Hall who dropped very few points in both singles and doubles throughout the event. The combination of Harry’s serve and backhand power and Thomas’ volleying prowess ultimately proved decisive.

For anyone inspired to play more tennis by the Team Challenge Event we are running a half term camp from 12 – 16 February. If you would like to be involved, please let us know / book as soon as possible so that we can book the necessary number of coaches and courts. The half term camp is now available to book online, click here

A big thank you to everyone who took part and supported the event. York Tennis Club for allowing us use of 5 out of 6 courts for the afternoon. Bradley Austin for running the event with me at the club. Matt Ward, Team Challenge Co-ordinator for Yorkshire and Christine Klee, LTA North Tournament director for assisting us in the preparations for the event and to the LTA for the provision of considerable prize packs which saw every child get either a tennis grip or shock absorber along with baloons and other prizes as well as tennis balls for the hard ball event.

We really hope people enjoyed the event, York Tennis Academy as a coaching set up together with York Tennis Club are always looking to improve our service and what we can offer. The club is ultimately hoping to be in a position to improve the facilities and whether through funding or fundraising private or public, obtain indoor / covered court/s as well as improved lighting etc and welcome anyone wishing to be involved in these projects. As coaches we welcome any feedback you may have, good or bad, if there are things you would like to see in addition to those we are running at the club at the moment please let us know. We are also hoping to gain greater sponsorship for both coaching and club in the coming months allowing us to continue to grow tennis at all levels, if you have not already done so please like us on facebook and if you have any photos from the event that you are happy for us to display either at the club or on the website / facebook etc we would be happy to do so.

It was great to see so many people at the event. We are determined to continue to run tournaments as often as we consider these an essential part of children’s tennis development and are provisionally hoping to run a further Team Challenge event on Sunday 11 March.